I first began talking to Tony in December of 2015; he had recently purchased some Active Hands gripping aids and was interested in picking my brains about my life with spinal cord injury, the abilities I had regained, and how I used my Active Hands aids in everyday life. Through our interactions and via social media, I have seen just how far Tony has come in the last two years and the ever-increasing number of exercises he is able to do using his Active Hands aids. When I contacted him recently to get some information with which to base this article on, I did so expecting a few lines about his life, his injury and his progress. What I got was an extremely open and honest account of life with a spinal injury, the emotional effects it can have on a person, and how the right attitude and outlook can make all the difference.

This is Tony’s story: 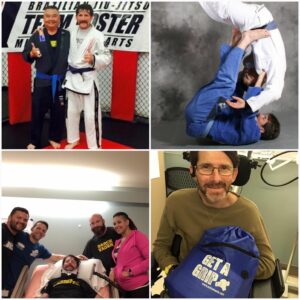 Originally from a small town in central Texas, Tony had always been passionate about keeping fit and active; with hobbies such as scuba diving, hiking, motorbike riding, and home remodelling. On top of all that, he was a martial artist of some 30 years who had left his full time job in order to follow his dream of owning and operating an Academy in his native state of Texas. At the time of his injury however, Tony had relocated to Seattle, WA, where he planned to open a new Academy once he had furthered his knowledge of Brazilian jujitsu! In the meantime, he was working for Lowe’s home improvement store and it was whilst at work one fateful day in 2015 that Tony’s life changed forever.

“You know it’s crazy that a lot of things in your life can happen to you and you can only remember about the time it happens. But when something that is as catastrophic as this happens you can remember the date and the time like it was yesterday.”

Tony was helping transport a 400lb gazebo, which had been stacked onto a utility dolly, to a truck for delivery. As he and his co-workers leaned the dolly back, the weight of the box took over, causing it to topple and strike Tony on the head. It only fell about a foot at the most before hitting him, however the weight of the box and force of the impact were enough to push his chin down with such severity that it broke his neck at C4 level.

Moments later, all he could feel were his head and shoulders on the floor and all he could move was his left arm. He knew the injury was bad, really bad, but he distinctly remembers managing to stay calm until the paramedics arrived and he was transported to Harborview Trauma Hospital.

The next thing he knew, he was waking up in ICU surrounded by tubes and monitors, unable to speak or move his hands, and at that moment he did begin to get worried and afraid. He spent three weeks under heavy sedation in ICU before moving to the rehab ward; however in the remaining seven weeks before discharge, most of his physiotherapy took place in bed, having developed a pressure sore whilst in ICU. Fortunately, throughout all this time and beyond, he was surrounded by his siblings and the fantastic set of friends he had made during his short time in Seattle, and Tony is the first to admit that without them “I don’t know what I would’ve done”.

Upon discharge, Tony was forced to move into a skilled nursing facility as there was no feasible way he could move back into his multilevel house. It was around this time that a realisation kicked in for Tony, that life as he knew it would never be the same…

“For the first time in my life I believe I truly felt lost. Not knowing what to do next. All my life I always felt in control, but now I didn’t feel like I had a handle on anything. Having to rely on other people for everything. Having the mind of an adult but the needs an infant. Believe me when I say that is the worst feeling I have ever had in my life.”

However, rather than let these feelings overwhelm him and cause him to fall into depression and self-pity, Tony instead decided to fight back, grab the bull by the horns and put all his effort into his daily physio and occupational therapy.

Upon arriving at the facility, Tony was still very weak, only able to lift his right arm a few inches whilst slouched in his chair. During these early stages, his rehab mostly consisted of using ankle weights on his wrists and working on his tenodesis. However, as Tony began to regain strength and movement, he soon required heavier weights but was unable to physically grip dumb-bells and found it extremely frustrating having to get them bandaged to his hands every time. This is when, following some online research, he came across Active Hands; and after watching the gym workout video Tony knew these were what he needed to “push [his] strength to the next level”. 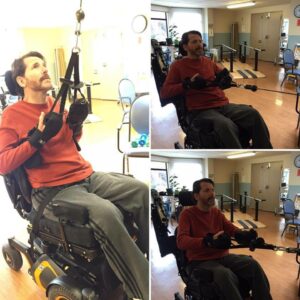 “I ordered them just as soon as I got through watching the video… I can’t thank Active Hands enough for making such a great product.”

After a year of building up his strength at the skilled nursing facility, Tony was discharged and moved into his own apartment; giving him a huge feeling of independence but at the same time filling him with nerves, as spending so long in hospitals and nursing facilities has a tendency to somewhat institutionalise a person, something I can certainly attest to! However, his initial nervousness soon turned to excitement and after a month of settling in, he began his outpatient therapy at a facility called Pushing Boundaries, a facility he still frequents to this day, getting put through his paces three times a week.

Pushing Boundaries has certainly lived up to its name in Tony’s case, as in conjunction with his Active Hands gripping aids, they have pushed him to his limits, enabling him to engage in every kind of arm-related exercise imaginable and helping him to regain a level of strength and movement that appeared lost initially. He uses his gripping aids every time he visits Pushing Boundaries and they’re showing no signs of wearing out. In fact, the facility loved his Active Hands aids so much that they purchased several pairs that they use with their clients every day!

“I put [the gripping aids] through a beating and I mean a beating because I also use them as boxing gloves. Not only do I use at the gym but at the house also holding a broom, vacuum cleaner. The summer is coming on, it will be exciting to see what I can use them for outside.”

Fast forward to the present day, and when he’s not working out at the gym, Tony can be found caring for the bonsai trees he has began to collect; his positive outlook and rugged determination to rebuild his life, showing no signs of abating. His sole focus remains his rehabilitation, and also wearing out his Active Hands equipment – good luck with that! His ever increasing strength, abilities and levels of independence have resulted in an overall increase in self-confidence. He now feels more at ease when using a manual wheelchair and has set himself the goal of eventually using it full time. Another future goal is to get back behind the wheel and start driving again, something I think every wheelchair user will agree is wholly liberating and opens up a whole world of new possibilities!

As far as dreams are concerned, Tony would love to get back in the water and scuba dive, as well as work out in the yard; both completely achievable. However, his main focus at present is spending more time on the mat, teaching martial arts from his chair; something he describes as more of a way of life than anything else. 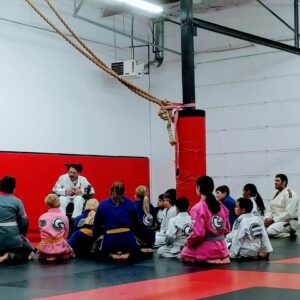 “When a person has a strong sense of confidence there’s nothing that they can’t achieve.”

As far as advice he would give to others in a similar position, Tony states that after going through a life changing injury such as this, it is easy to fall into a shell; but that you must resist this temptation, seek out help and don’t try to take everything on alone. Despite doctors telling him that things got easier after the first year, Tony found that things got tougher; as the first year was so taken up with hospitals and recovery that he didn’t have time to really sit and process the full extent of what had happened and the long, hard journey that lay ahead. Tony knew he had two options: Either allow himself to sink into self-pity or get up and fight.

Tony’s martial arts background meant that he was used to having mentors, and so he took a similar approach with his spinal injury, seeking out people both locally as well as on social media and SCI forums. Meeting with and speaking to a wide variety of people who were either personally affected by spinal cord injury or professionally involved with it provided a huge boost to Tony, letting him know he was not alone in this and giving him advice, ideas, goals and a positive outlook for the future.

To me, Tony exemplifies the never give up, can do attitude. To come so far, both mentally and physically, in such a short time and after such a serious injury is a true credit to the human spirit. With his drive, determination and positivity, I have absolutely no doubt that Tony will not only get stronger and more able, but will continue to craft out a successful, fulfilling life for himself, and we here at Active Hands are proud to have been able to play a small part in this.

In the meantime, I’ll leave you with the five motivational sentences that Tony created and pinned to his wall, where he can see them every morning when he wakes up: