Over the past year, we have featured the stories of some incredible athletes; people with a wide range of disabilities who compete at the highest level in their sports and have represented their country at the paralympics. Their stories have motivated and astounded us in equal measure! But sometimes the most encouraging stories are those of quieter achievements; regaining independence, arriving home from rehab and returning to daily lives after a traumatic injury.

In 2011, Jerod was on holiday with his family. Excited to get into the ocean, he ran down the beach and dived in unfamiliar water, striking a rock and breaking his C5 vertebrae. With no trunk control, no sensation from the chest down and very limited arm movement, Jerod was barely able to control a power wheelchair and was told he might never feed himself. “It’s affected nearly every aspect of my life,” explained Jerod, when he wrote to tell us of the difference rehab and Active Hands gripping aids have made to his recovery.

Jerod was in rehab for 4 months as an inpatient and upon discharge was determined to find a specialist team who together would push him to “achieve more than [he] was lead to believe was possible”. Embarking on a packed schedule of OT, pool therapy, fine motor work and weight training amongst other sessions, Jerod’s determination has turned into some impressive progress. 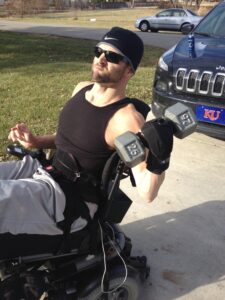 Whilst at Craig Rehabiliation in Colorado, Jerod was introduced to Active Hands gripping aids and, combined with an equally determined OT named Ryan Bird, they helped his rehab to really turn a corner. Ryan explains, “Jerod was able to bring a pair of Active Hands home with him and we have used them in his rehab every day for the last five years. He has progressed from lifting 1lb weights to 30lbs in around four years. The progress he has made has been truly remarkable.” This incredible progress has ensured Jerod has felt benefits not only on his arms but his trunk too. “We couldn’t have done it without your product and for that we are forever grateful,” says Ryan.

Now a participant in an outpatient program under Dr. Harkema of Louisville, Jerod is hoping to push the boundaries of science forward by showing that hard work and dedication can make measurable differences to the quality of life of those with spinal cord injuries.  To get a feel for the impressive level of hard work Jerod has committed to over the past six years and the amazing progress he has made, check out a video made by his OT, Ryan, here.  If you would like to know more, you can get in touch with Jerod via facebook, or go to The Walk On Foundation. 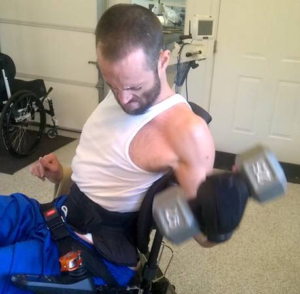 Jerod describes the rest of his life as his ongoing ‘rehab’ and is determined to “never give up”. He explains, “I believe with hard work, you’ll amaze yourself at how far you’ll go. Active Hands have helped keep me on track towards the goals I have for myself. Not only have they made me exponentially stronger, the secondary benefits like overall wellbeing and confidence are immeasurable.”

Whether your gym sessions are part of an intense training program for high-level sport, or more about individual goals and an improved sense of wellbeing and confidence, a determined attitude and a little help from Active Hands can clearly go a long way! Good luck with all your fitness goals this year and don’t forget, we love hearing how you are all getting on so feel free to get in touch or send us some pictures of your workouts!