Putting The “Aid” In Homemade

So here we are: 2019 and 14 years down the spinal cord injury line. Where does the time go?! It feels like only yesterday when I was lying helplessly in my bed in HDU, being rolled from side to side as the nurses bed bathed me and I wondered to myself why they always seemed to take so long washing my back (turns out they weren’t just washing my back)! Months later I would be discharged to my parents house, complete with the most rudimentary set of wheelchair skills, and just about able to wash and dress my top half, but very little else.

As my parents house wasn’t built with wheelchair accessibility in mind, I stagnated in this basic state for around 18 months, until a flat became available nearby. Once moved in, I spent the next year or so exploring ways of getting around my disability and regaining my independence. This started off with simple things like getting dressed/undressed, showering myself, using the toilet etc, before gradually moving onto things such as transferring in and out of a car, taking my chair apart, cooking and the like (although how much cooking you can actually do with a microwave oven and plug-in, electric hob is highly debatable!)

Finding success in each one of these processes was very much down to trial and error, having to experiment and explore every possible avenue in order to find the one that worked best for me and my specific injury (no spinal cord injury is the same after all). For the longest time, before I discovered this, in order to get toothpaste out of the tube I would suck it out. I didn’t have the individual hand function that would allow me to squeeze it out whilst holding the brush, and if I sat my toothbrush down and used two hands, more often than not the brush would roll onto its side at some point, smearing paste all over. So instead, twice a day I would sit and casually suck a white substance into my mouth, now let’s all move on like the mature adults we are…

By Hook or By Crook

An integral part of this general experimenting came in the form of finding and utilising items to help me achieve my goals. These could be purpose made disability aids such as a monkey pole hanging over my bed to help me sit up and pull myself around, easy use nail clippers, or jar/can/packet openers and cutlery grips. However they could just as easily be everyday items, repurposed to work as disability aids.

Before I was discharged from hospital in 2005, a staff member gave me what looked like a large safety pin that would traditionally be used in embroidery or some kind of crafting I presume. They knew that I was struggling to do up buttons on trousers and shirts and thought that I may be able to use this item as some kind of looped hooking device that I would insert through the button hole, hook round the button and then pull back through the hole. And it worked like a charm! I used this repurposed crafting hook on a daily basis for many years, and even though I picked up purpose made button aids and eventually worked out a way of doing buttons up by hand, this little beauty still resides in a drawer next to my bed in case of button related emergencies! 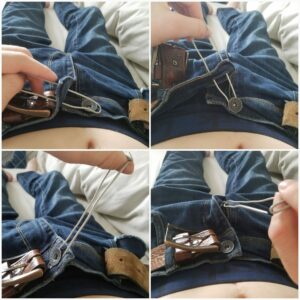 The 4 stages of tetra trouser tightening!

This proved to be the first of many subsequent times when an everyday item was repurposed and put to use as a disability aid in my neverending battle for independence:

These are just a few examples of how I repurposed and used everyday items as disability aids over the years. Of course I’m not saying that these were all my own original concepts, I’m not the wheelchair MacGyver! But with a combination of creative problem solving, searching online and chatting to friends who may have similar struggles, I found that it was often possible to create my own solutions. They may not have looked glamorous or professional, but dammit they worked! You’ve got to remember that this was back in the dark ages, before companies like Active Hands were formed, when the majority of disability aids were made for those who could grip the items. It’s all good and well having a reacher/grabber, but if you need to operate it by squeezing the handle & trigger together, then it’s completely useless for anyone with limited grip! If only there was one available that you operated with your wrist… 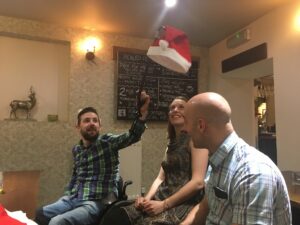 Letting something as trivial as a quadriplegia get in the way of my holiday shenanigans? Never!!

Anyway, fast forward to summer 2017; I move out of my flat and into a house, complete with ramped entrance, through floor lift, and wet room, plus a real oven and set of five gas hobs!! I was both literally and figuratively cooking on gas!

You may be wondering why I’m focussing on the cooking aspect of things here or, more likely, you may just want me to get to the flipping point! Well here it is: Above my hobs sits an extractor fan to suck away all the steam (and occassionally smoke!) that comes out of whatever culinary “delight” I may be cooking up. Unfortunately, the controls for the fan are located on the front of it, a good 50+cm out of my sitting reach.

So for the next 18 months the extractor fan sat virtually unused, unless I was cooking with an able-bodied friend or family member. Almost every day I would use the hobs to cook or heat things up, and almost every day the kitchen windows would steam up and condensation would trickle down them, onto the sills. Every few months, usually coinciding with my cooking accidentally setting off the smoke alarm, I would search online for a wheelchair button pusher, prodder or poker; but to no avail. I should mention here that I know you can get lowered extractor fans or ones with remote controls, but I don’t know, it just somehow seemed wrong to spend hundreds of pounds replacing a perfectly good fan just because I couldn’t reach the damn thing! I’m not what you would call, flush with cash, and it wasn’t like it was creating a huge issue for me, I just had a bit of a sweaty kitchen!

Then one day I had a bit of an epiphany. An idea that could solve my clammy kitchen conundrum. So I popped onto Amazon, found what I was looking for and placed my order. And when it arrived the next day, I was ready for action… 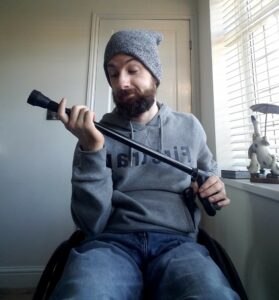 Yes, the answer to my pusher/prodder/poker problem came in the form of the OG mobility aid, the granddaddy of them all – The Walking Stick! 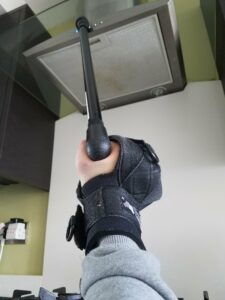 Now I know what some people will be thinking at this point: “Well duh, I can’t believe it took you a year and a half to think of this”, or maybe, “So…you bought a stick? Congratulations”, and both are valid points. Maybe it should have dawned on me sooner to think outside the box. But I was so focussed on looking for a purpose made solution, that I didn’t think to consider other possibilities. And maybe it doesn’t seem like that big of a deal to some people. After all, there are far bigger problems in life than having a steamy kitchen. But to me it was about overcoming another small hurdle to keep on proving to myself that every problem my disability may throw at me has a solution.

The overall point I’ve been trying to make in this entry is that no matter what disability you may have, you will always be presented with problems to be solved. Ever since the first person decided to walk with the aid of a stick in order to take some pressure off their aching body thousands of years ago, we have been creating solutions for disabilities. Thankfully we live in a time now where mobility stores are common place in towns, and online stores offer a huge variety of disability aids for virtually every aspect of life, so we need to do very little problem solving of our own. Thank god someone invented the wheelchair and marketed it to the masses, otherwise I’d probably be getting piggybacked everywhere! 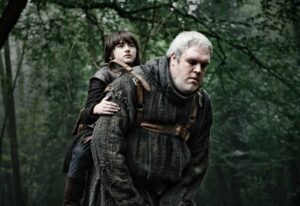 “Faster Hodor, the Next sale begins at 6am!”

However, there will still be the occasional oddity, a problem that feels more specific than generic perhaps, that needs that little bit more thought putting into it in order to come up with a solution. This could involve repurposing an already existing household item, giving a new use to an existing disability aid, or maybe even coming up with your own invention – there is a solution for everything. And if you can’t find what you are looking for in stores or online, it just means it hasn’t been invented yet!

Rob Smith was faced with just such a dilemma after his injury, when he found that there wasn’t anything available to help with the lack of grip in his hands. So he developed the General Purpose Gripping Aid and formed The Active Hands Company which has now been solving disability related problems worldwide for over a decade!

But what about you guys? Have any of you come up with any ingenious solutions to life’s little problems that you fancy sharing? If so, then feel free to comment below!

Oh and speaking of repurposing existing disability aids, I shall leave you with this image, taken from a website that has found a very specific use for the General Purpose Gripping Aid! 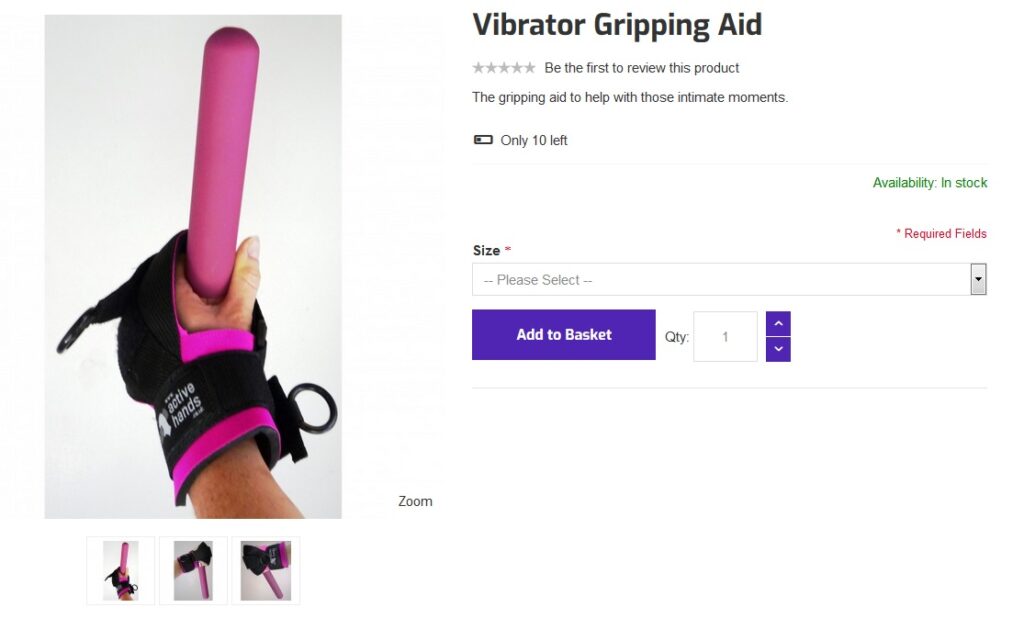 I really hope the “Size” option relates to the Gripping Aid!