Adventures in the Mud for Troy 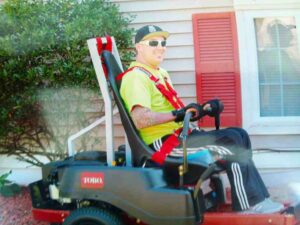 Troy Flagg is a 37yr old man who sustained a diving accident that left him with a C6/7 spinal injury. Troy dived into a pound to cool off after playing a round of horseshoes. His dive ended in disaster as he struck his head.

Before his injury Troy’s hobby was riding and maintaining his Chopper motorcycle. He regularly went out on rides with his wife and his friends. He is a meticulous person and kept his vehicles and home in the best shape possible.

After his injury Troy struggled mentally to relate to things, having always being so self-dependent and in control of his life. 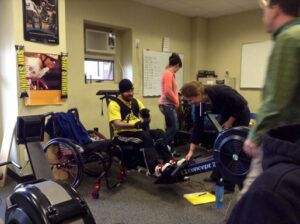 After some time had passed Troy was introduced to a FES (Functional Electronic Stimulation) rowing program that specialised in people with spinal injuries, such as Troy’s. The Spaulding Rehabilitation Centre in Cambridge, Ma. aims to provide effective exercise to improve health levels for those with disabilities. This is where Troy was introduced to Active Hands gripping aids.

As Troy has no finger movement he could not shape his hands to grip the T-handle of the rower. The Active Hands gripping aid helped him, and many others in the program, to stay connected to the rowing machine. Troy has since competed in an international rowing competition.

Not only has our product given Troy practical help- in giving him the ability to take part in the Expd rowing program- it has led to him meeting other people in his situation. This has been a great help in getting his many questions answered.

Troy uses his gripping aid at home to drive his sit-on lawn mower. There is a video of him doing so here. 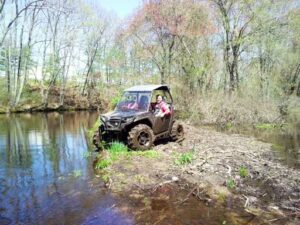 But the thing that makes Troy smile the most is when he uses his gripping aids with his Polaris Razor 800 xc. This UTV allows Troy to go out into the woods trail riding with his friends. As well as riding tracks they also drive through mud holes and shallow water – it sounds like a lot of fun. He has a push/pull control system installed that he uses with his Active Hands gripping aid.

“The most fun I’ve had while using my Active Hands gripping aid has been going out in the woods riding the Polaris. I’ve ridden dirtbikes, four wheelers… I was involved in just about anything that had wheels and burnt fuel since I was a little guy, so to be able to get a little muddy again was nice. The machine doesn’t know I’m a quadriplegic and when I’m out thrashing in the mud, woods etc. neither do the other riders, I’m just as functional as the able bodied and that makes the playing field much more enjoyable.”