It had been forecast to be thunderstorms and rain all weekend. So as the unexpected sun shone across the camping field, spirits were especially high. The kids were playing football, the adults were sipping the last of our morning coffee. It was time to make some plans for the afternoon. And Rob was keen to try a kayaking adventure!

Jen, Rob and Gary have been friends since meeting at a wheelchair racing training session years ago. This weekend was the first time all three had camped together, along with their partners and children. Jen is a 40 year old doctor specializing in anesthetics and intensive care. 13 years ago she had an accident resulting in limited use of her left leg and becoming a wheelchair user. Initially, Jen began to train with Rob and Gary at wheelchair racing. But she later became interested in a different sport. “I was introduced to kayaking by British Canoeing who were looking for new talent.”

Jen brought her inflatable kayak along with her on our camping trip. As she began to set it up for an afternoon paddle she explained how that the sport adds so much to her life.

“Kayaking trains my body and calms my mind. Working in intensive care through the pandemic has at times seemed too much, but somehow the world is a better place after a paddle.”

Never one to miss out on an opportunity for adventure, Rob had brought along one of our latest products, the Kayak Adaptations. “When I first came across the Adaptations, I thought they were simple and well designed… but wanted to test them out first so that I could be sure they would do the job required. This camping trip was the perfect chance!”

The Kayak Adaptations consist of two parts – a hand adaptation and a wrist adaptation. These can be used individually or in combination. Both enable the user to hold a kayak paddle firmly, with good range of movement but also enable a quick release.

“Easier than I expected”

With the youngest children off on an adventure to a nearby farm, Jen, Gary, Rob and his son, Jacob, set off for the canal to test out the adaptations and kayak.

Rob used both the hand and wrist adaptations together and found the ‘setup’ surprisingly straightforward.  He explains, “getting the adaptations lined up correctly needed a couple of adjustments but was actually easier than I expected. Getting into the boat and out onto the water could be tricky in some environments. But with assistance you can often set up on land and then have helpers drag the kayak into the water.”

After a short setup and a careful transfer from wheelchair to floor to boat, Jen, Rob and 8 year old Jacob were ready to kayak. The adaptations quickly felt natural. Rob and Jacob were able to take on board (excuse the pun!) Jen’s advice and get paddling pretty smoothly. The smiles in the video below say it all… a fantastic activity, whether you have a passion for the sport or just fancy giving it a try on a sunny Saturday afternoon. 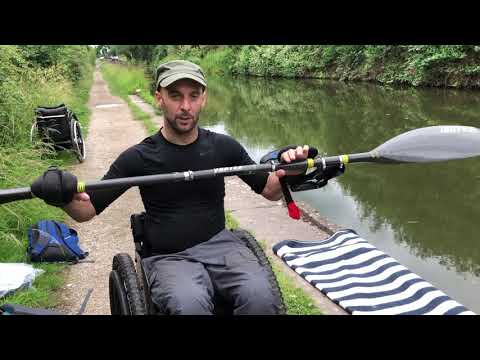 Rob says, “it felt amazing to be able to do a physical activity with Jacob and Jen in an equal way. Once in the water and moving we were just like any father and son doing a fun activity together. It was a great feeling to be able to go off on our own together like that.”

And Jen’s feelings about kayaking paint a very similar picture, “ I love how no one can see my wheelchair when I’m kayaking and I can go where I want. I love just enjoying nature and noticing it without disturbing it. Paddling with my daughter is so enabling – yes I need help getting on the water but then I’m totally independent.”

The Kayak Adaptations enabled Rob to grab the opportunity of an afternoon out on the water with friends, an opportunity he’s keen to take part in again. In fact, much of the rest of the camping trip was spent discussing inflatable kayaks, good paddling spots and technique advice! Adding the right tool to enable you to take part in an activity with the most independence possible can be the key to being able to say yes to new opportunities and just maybe, finding a new passion.

“I was really impressed with the Kayak Adaptations,” says Rob. “I could hold the oar really firmly and I felt I could paddle pretty much as well as I would have been able to before my injury. They are an awesome product that allowed me to enjoy kayaking again without the constant frustration of my weak hands not gripping the paddle properly.”

If you’re tempted out onto the water this summer, why not check out our Kayak Adaptations. Or browse our shop and see if we have the right aid to enable you to say ‘yes’ to a new challenge this year!