Irene Cruises into the Gym

Irene Bradbrook has always been an active person; dashing about, being busy. She had spent three and a half years looking after her husband, who had dementia, before his condition declined and he needed to go into care (he sadly passed away in 2013, just after his 65th birthday). She had a part time job as a receptionist for a beverage company, which she enjoyed. After work each day she would go to the care home to feed her husband his cooked lunch. 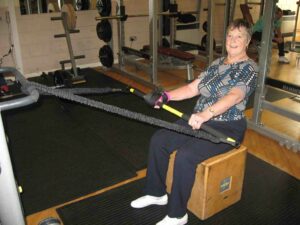 On the 17th Jan 2012, after visiting the care home, she arrived home and sat at her computer. After a while her right hand went dead. She stood up and her right foot went under her. Realizing that something was wrong she crawled to the telephone to dial the emergency services. As she struggled to the phone she remembers her pet cockatiel wandering up, and thinking to herself that she should have called him Lassie, not Joey!* Irene was rushed to hospital where she was told that she had suffered a stroke.

Irene was in hospital for ten days and then transferred to rehab for three weeks. The stroke had affected her right side, leaving her with weakness down this side. As she was right-handed Irene had to start the process of learning to do everything left-handed. For the following six months Irene had physiotherapy through the NHS: the hard work paid off and she learnt to walk again.

Irene suffered a set back when she developed carpal tunnel syndrome in her stroke-unaffected, left hand. She required surgery to release the compressed nerve. 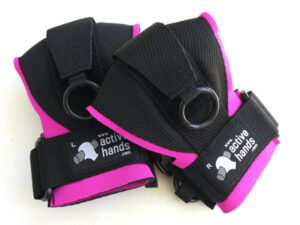 Having finished the NHS treatment program, Irene now found herself responsible for her own fitness. She began visiting a private physiotherapist who was passionate about his job and encouraged Irene greatly. He explained to her about making new connections from the brain to the damaged limbs. Irene began to feel that life could get better.

Irene’s visiting hairdresser told her about a scheme set up in Wakefield by Wakefield Met Council and the NHS, called ‘Get Fit, Get Healthy’. She asked her doctor to sign her up for it. Craig, the scheme activator, thinks that she is amazing: and the gym visits give her such a boost that she goes every Friday as well as doing the exercises at home.

Craig introduced Irene to the Active Hands gripping aids. She uses them to get a firm grip in the gym, enabling her to stretch her arms using the hand cycle, the rowing machine and the bar. 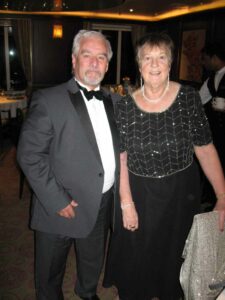 Irene enjoys going on cruises with her friend. In October they went away together and, as usual, Irene wanted to use the gym. As the Active Hands aid that she normally uses belongs to the gym, Irene’s friend resorted to tying Irene hands to the gym equipment with a serviette. At this point Irene decided that she really needed her own Active Hands gripping aid.

Irene has seen the benefit of regularly taking part in exercise and the difference it makes to her both physically and mentally. She says:

“I enjoy using the gym and think I’m doing the best for ME. I go to the gym on the ships as often as possible.”

Her Active Hands gripping aid plays a big part in making this possible.