Philippa shares a flat with a housemate on the outskirts of London, and loves running, hiking, dancing and seeing friends. 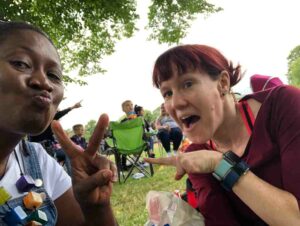 In her early thirties Philippa found herself returning home from hospital after losing her fingers. She was so relieved that the pain had ended that she hadn’t even considered the impact this new disability would have on her life.

She so loves being active that she went on a cycling holiday in France in between operations on her hand!

When her surgery was done, she had lost three fingers and part of her palm on her left hand and two fingers on her right. Initially, she really did believe that it would be easy to adjust, but the resulting weakness, easily sprained tendons and ‘clawing’ of the remaining fingers made it difficult for Philippa to ‘Get a Grip’. 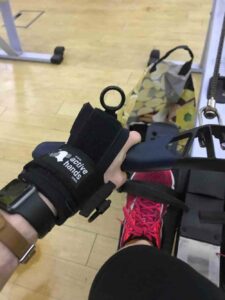 With this newfound difficulty, Philippa could have accepted her local council’s offer of ‘meals on wheels’ and resigned herself to being unable to exercise like she used to, but she refused to allow her disability to get in the way of the active lifestyle and independence she loves.

In the kitchen, Philippa has found that most equipment isn’t easy to use without fingers, but she hasn’t let that stop her! Philippa’s adopted microwave cooking as her new speciality – she’s branching out from ready meals and cooks from scratch, chopping fresh vegetables with her right-angled knife from Active Hands! Her sister found some double walled plastic bowls online which can be picked up from underneath without burning her hands. She uses gadgets to help with everything: taps, jars, tins, bottles, and making sure she has a good grip on the frying pan handle! See the range on our website for great gadgets! 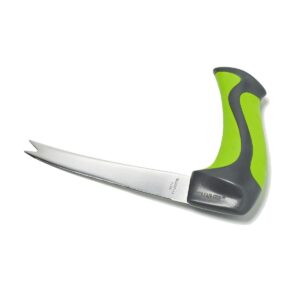 “Finding products that made life easy again, meant I could still do what I enjoy, not be reliant on others and continue where I left off.”

She loves her Ungrip which saves her phone from many a fall and is great for texting (she can hold it with 1 finger and text with her thumb! 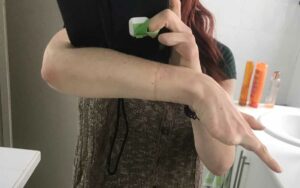 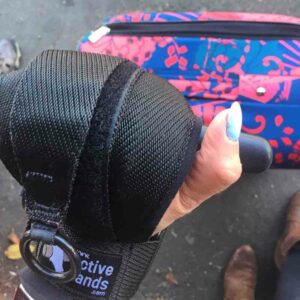 Beyond gadgets, Philippa is great at finding other little ways to make her life easier – she’s sown her keys and Oyster card to her bag so that she can commute at a normal speed in busy London without worrying about dropping them in rush hour!

Philippa’s outlook is simple: “It’s not that I can’t, I just do it differently.”